Shannon Longworth '14, an investigative reporter and anchor for Straight Arrow News, visited the Sacred Heart Multimedia Journalism via Zoom on October 1. She spoke to students and coached the anchors.

Sacred Heart Greenwich seniors Olivia Christensen, Lé-Anne Johnson, Eloise Moulton, Isabelle Pipher, Sofia Pye, and Lilly Thompson will study film, journalism, and media at their respective universities next year.  These five seniors will utilize the skills they have learned in Sacred Heart’s media programs to pursue their passions in the news and communications industry.

The event was open to Sacred Heart Broadcast Journalism students in the classes of 2021 and 2022, and all Sacred Heart Greenwich alumnae. More than 50 members of the Sacred Heart community attended. The event took place over Zoom Video Communications, November 18, from 7:30 p.m. to 8:30 p.m. The event began at 7:30 p.m. with a panel discussion, and shifted to breakout rooms at 8:00 p.m.

Ms. Caroline Keller graduated from Sacred Heart Greenwich in 2013, and continued her education at Tulane University. She now works as franchise production coordinator at Lucasfilm in San Francisco, California.

"There are so many opportunities at Sacred Heart that so many people don't get, and if you take advantage of them, you have a good chance of knowing what you want to do, even before college," Ms. Keller said.

Ms. Erin Manning ‘13 currently works at Sesame Workshop as an International Social Impact manager. Ms. Manning graduated from Sacred Heart Greenwich in 2013, and went on to graduate from Northwestern University in 2017. 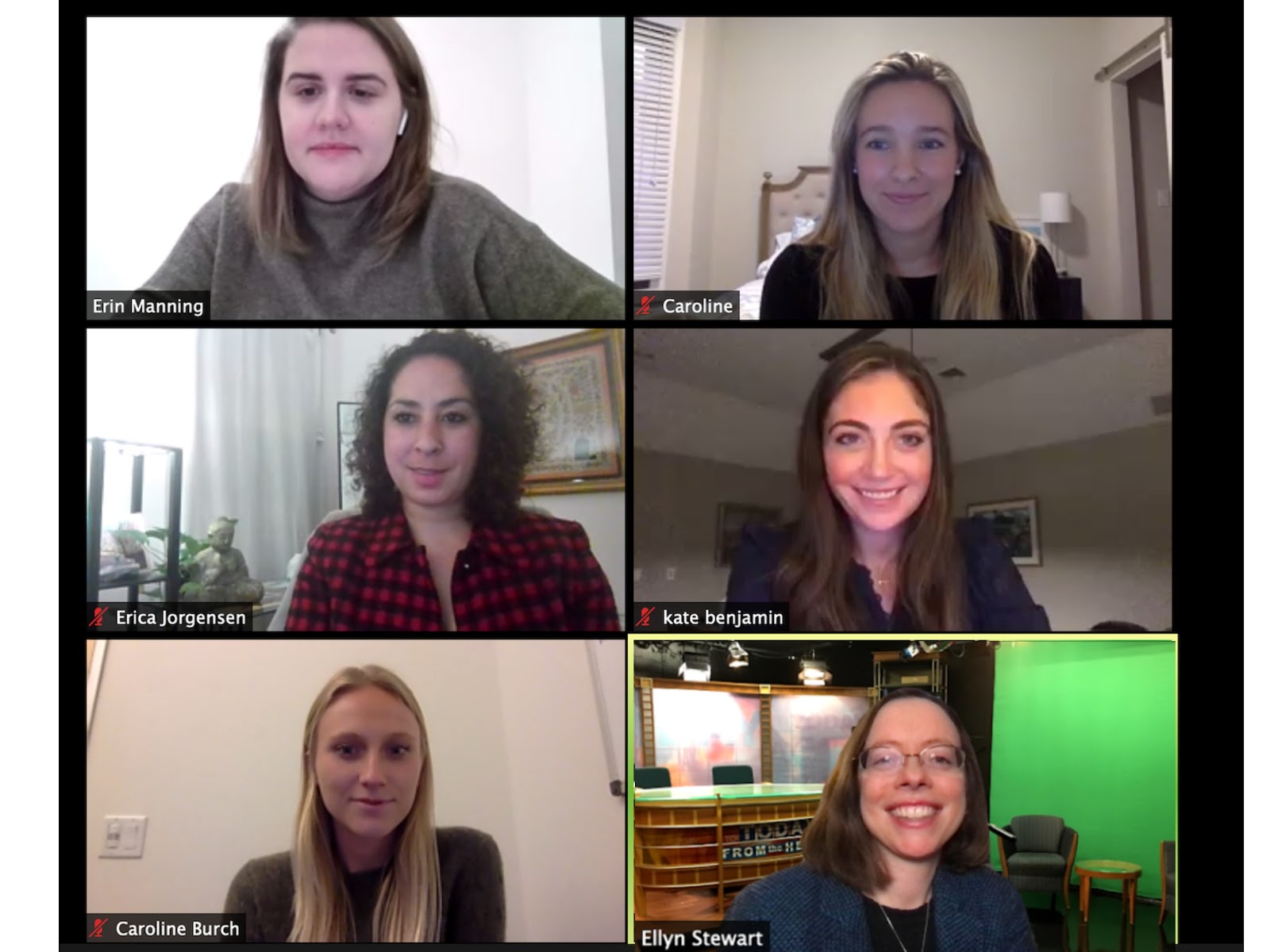 "Sacred Heart gave me not only the access to media, and being able to produce and develop my own content, but also giving a good plug to the Goals and Criteria, I work in the impact space and in community development, and I think that was something that was really engraved in me since my first day of eighth grade at Sacred Heart," Ms. Manning said.

Ms. Caroline Burch '15 graduated from the Annenberg school of Journalism at the University of Southern California in 2019, and went on to work as a Digital Production Assistant at The Ellen DeGeneres Show.

Ms. Kate Benjamin ‘11 works as a Product Strategy Manager at Warner Media. She has worked there since October 2019. Ms. Benjamin graduated from the College of the Holy Cross in 2015.

Ms. Erica Jorgensen ‘04 works as an Executive Producer of Investigations and Special Projects at NBCUniversal Media in West Hartford, CT. Ms. Jorgensen graduated from Sacred Heart Greenwich in 2004 prior to completing her education at Brown University.

“To have the experience of writing scripts and going out to shoot is some of the training I learned while at Sacred Heart, and to go into college with that background, I felt set up for success,” Ms. Jorgensen said.

Due to the inclement weather, the Sacred Heart Greenwich campus is closed today, Thursday, 1/20.