This class began in 2017 for the purpose of helping students to make movies to make a difference. This course gives students the opportunity to work directly with non-profit organizations to make Public Service Announcements, documentaries, or other videos that can be used to share important community messages.

This class was inspired by Goal Three of the Sacred Heart Goals and Criteria: Schools of the Sacred Heart commit themselves to educate to a social awareness which impels to action. Through this course, students learn to be active, informed, and responsible citizens of our world.

​Our students have partnered with non-profit organizations such as:​ 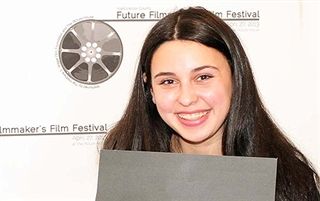 Jackie has participated in the Broadcast program at Sacred Heart since she was a fifth grader. She took Summer Enrichment courses as well as the 8th grade Broadcast elective. Additionally, Jackie has worked with Teen Kids News, a nationally syndicated TV news program on more than 200 stations around the world. Jackie's documentary about the Special Olympics was accepted into multiple film festivals.

"Special Olympics is an organization that teaches people with intellectual disabilities to play a variety of sports and get active. I have worked with Special Olympics for many years as a coach for figure skating. When my class was assigned to create a documentary, I knew that I wanted to do it about Special Olympics. Special Olympics has shaped my life in so many different ways, and it has allowed me to realize that there is so much more to both life and athletics than running the fastest or winning the award. Working on this documentary was a very rewarding experience. I spent so much time working on interviews, driving to Villanova University, editing, and more. By putting so much effort into my work, it made finishing my documentary so much more rewarding in the end."