Creative Filmmaking students take a major leadership role in planning the Sacred Heart Film Festival, one of the biggest nights of the year for broadcast students of all levels, with a packed audience of more than 400 people. Judges from the media industry watch the students’ videos and select the winners. 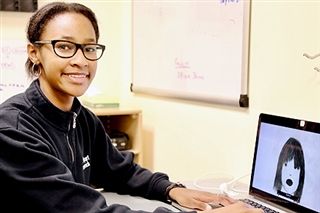 Olivia decided to attend Sacred Heart because of the School's filmmaking program in addition to its rigorous academics. In her freshman year, Olivia made a short documentary about vinyl records, an experimental film about African-American art and culture in Harlem, and an animated short based upon a poem that she wrote.

"The Film Festival at Sacred Heart is a big event and opportunity for students to share their work with the school. When I attended the Film Festival in eighth grade, before I was officially a student at Sacred Heart, I was inspired by the impressive films that these high school students were making. Also, even though not all films make it into the film festival, students can still have their work shown throughout the week leading up to the film festival at morning meetings and are encouraged to submit their work to the many other festivals in the area."